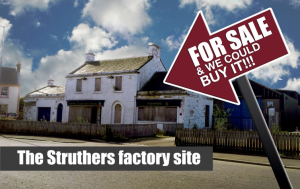 Lochwinnoch Community Buyout Group has been pulling out the stops since hearing the exciting news that the Struthers factory site is up for sale.  But every villager must get involved too – please turn up and vote at the Buy Struthers Ballot.

To keep our right to buy the site (without which it will be thrown onto the open market), we must show that the majority of us support the idea of the Struthers site being bought by LCBG so the community can input into the uses for the site.  The ballot will probably be held on a Friday and Saturday either at the end of November or in early December.  This ballot is vital to the village retaining its right to buy Struthers.  To do so, we must have at least half the village turnout to vote and at least half the voters must vote in favour.  It’s a big ask, as they say, but if we don’t then that’s the end of the village’s input into how the site will be used in the future; an opportunity lost.

We will be arranging proxy voting, so if you think you’re likely to be away, please ensure that you complete the form (available nearer the time) to allow a relative or friend to vote on your behalf.

After being alerted to the sale, LCBG arranged a public meeting in early October, attended by over 90 people.  Villagers were informed of the current situation, given a brief history of the group’s attempt to buy the site back in 2007, when we were accorded the right to buy, and the tight timescale we are on.  LCBG will be seeking funding, now, for the purchase of the site and, later, for its phased development.  As was explained in last month’s Chatterbox, villagers have come up with a number of great ideas for the site, which will need to be balanced with commercial use for a self-sustaining income.  For instance – a sports hall is badly needed, perhaps with a gym, since the village has lost both these facilities, and with changing facilities for the outdoor sports in the field behind on its doorstep this would make a wonderful asset to the area.  This could be commercially complimented by also providing small, commercial space with business facilities, which local businesses may not be able to afford individually.

LCBG now has a number of activists on board helping with the campaign.  These people are getting busy with fundraising and the business plan.  More are very welcome, please contact LCBG@lochwinnoch.info.

So, do watch out for the ballot information and voting forms coming through your door in November.  Do join LCBG (membership forms are on the village website on the Forum/Talkback page and around the village) as it’s vital we show we have widespread support if we’re to get funding.

After a long and involved application process, LCBG were finally awarded the 'right to buy' the old Struthers lemonade Factory building in May 2006 by the Scottish Executive/Government. This followed the village ballot when around a thousand people turned out to vote, 90% of whom were in favour.
We were then facing another period of hard work trying to get the plan into a final shape, to draw together the sources of money and to get ourselves into a position whereby we could actually put in a bid to buy the site by Nov 17, the date set by the legislation.

Instead, we very quickly received a letter from the owners’ solicitor saying that the owners were formally withdrawing the property from the market. This, it seems, is a very unusual situation since most other applications, if they get this far, go on to completion.

As the right to buy in this case does not involve any element of compulsory purchase we can go no further at this time. However, our claim on the property will continue for up to five years, during which time, if it comes on the market we can buy it and they can only sell it to us. After the five years we could reapply and renew our application.

In the meantime we are continuing to develop our plan and having talks with possible funders and other supporting organisations. We have requested a meeting with the owners to discuss the matter and see if they can’t be persuaded to do the decent thing for the village, and hand back this useful bit of land which is now badly needed for social enterprise.