Just as the Semples had acquired their lands through royal patronage, the Macdowalls had similarly been granted lands in the south-west of Scotland. They were made Lords of Galloway with estates around Garthland Tower near Stranraer.


MACDOWALLS OF CASTLE SEMPLE 1727 – 1814
In the late 1600’s, like other sons from West of Scotland families, William MacDowall sailed to the West Indies to make his fortune. He settled on the islands of St Kitts and  Nevis to work on the sugar plantations. It was there that he met his lifelong friend James Milliken, originally from Ayrshire. In time both men succeeded in becoming plantation owners. The fortunes of both men were enhanced considerably through marriage ;  James Milliken married the widow of a well established Bristol plantation owner and William MacDowall married her daughter. In 1724 William now aged 46 decided to return to Scotland. His wife and 6 year old son would join him some 3 years later.

William MacDowall, the First of Castle Semple ( 1727-1748 )
Although most of his business interests were in London and Bristol, William determined to settle in Scotland. In 1727 he purchased Shawfield Mansion in Glasgow which stood on Argyle Street at the junction with what is now Glassford Street. He also sought to purchase a country estate as an investment. In 1727 he bought the Castle Semple Estate of Lord Semple “ being one of the best inland estates in Scotland “
William had amassed considerable wealth and at the time he purchased  the Castle Semple Estate was considered to be “ the richest commoner in Scotland “. His commitments include

*   The maintenance of shipping to transport goods and provisions to his plantation
In the West Indies and to return with cargoes of sugar.
*   Arranging a supply of plantation managers and labourers
*   the construction and management of Sugar Houses in Scotland to refine the imported
molasses.

Prior to his buying Shawfield Mansion it had been badly damaged during the 1725 rioting over the Malt Tax. William therefore had to have the house largely rebuilt. In addition, the old Semple home, “Castletoun”, had fallen into disrepair and was no longer a fitting residence.
Seven years after he had taken ownership, William replaced the old building in 1735 with the much larger and finer Castle Semple House. 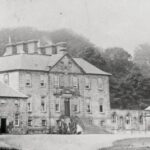 As principal land owner, William MacDowall was responsible for the Kirk and parishioners of the extensive Parish of Lochwinnoch. The old church building at the foot of Johnshill had been negelected and, under MacDowall’s stewardship, was partly rebuilt in 1729. This included the construction of a new gable on the south-west face which remains standing today ( Auld Simon ). Around this time parishioners living on the south side of the Loch were requesting that a bridge be built to replace the ferry from Loch Hall to the small pier where the Skippers Path joined the lochside. A bridge would ease their journey to and from the kirk and the market.

William’s wife, Mary, who had spent all her life in the West Indies, died shortly after coming to Scotland. She is buried in Glasgow Cathedral. His second wife, Isabel Wallace of Woolmet near Edinburgh, gave him two sons and a daughter. James, managed the St Kitt’s estates while John looked after the Woolmet Estate. When William died in 1748, his eldest son from his first marriage, also named William,  inherited the Castle Semple Estate.

William MacDowall the Second of Castle Semple 1748-1776
William was 30 years old when he inherited the estate. In the same year he married Elizabeth Graham, daughter of Admiral Graham, by whom he had 12 children. Four years later he bought the Garthland lands and title from his cousin in Galloway. His title became William MacDowall, 20th of Garthland and 2nd of Castle Semple.
He continued to manage family businesses in Scotland in close partnership with the Millikens and also the Houston family from Johnstone who had ships plying between the Clyde and the West Indies. Members of the family looked after the overseas interests.

William was one of the founders of the Ship Bank in 1752. This was the first bank established in Glasgow to provide venture capital for traders and industrialists.
In 1760 Shawfield Mansion in Glasgow was sold to John Glassford and the Ralston Estate and lands at Cathcart were purchased. In the same year William had the wooden bridges over the River Calder in Lochwinnoch and the River Cart in the Howwood replaced with fine stone bridges.

In 1768 William was elected Member of Parliament for Renfrewshire. 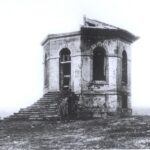 In the 1760’s the small tower on Kenmuir Hill was built almost certainly as a vantage point over the estate. The 1770’s witnessed many improvements on the estate ; planned gardens to the front and rear of the house, open parklands with carriage drives, re-established fish ponds, extensive tree planting, and an additional 250 acres of agricultural land exposed by a drainage system on the loch. 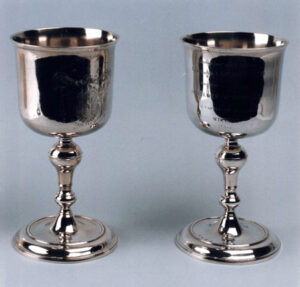 Before William died in 1776, European wars during  in the 1750’s/1760’s and the American War of Independence had damaged the MacDowall fortunes. The ensuing movement to abolish slavery would more significantly affect the family’s wealth and influence.
Of note, Kelvingrove Museum has a set of silver Communion cups inscribed in Latin, “William MacDowall of Castle Semple generous man gave four of these cups for use in Lochwinnoch Church, 1756”.

William MacDowall, 21st of Garthland and 3rd of Castle Semple 1776-1810
William III remained unmarried, giving much of his life to politics and civic matters.He was a non-practising advocate and served as Rector of Glasgow University from 1795 till 1797. He was a Member of Parliament from 1783 until his death in 1810 and acted as Lord Lieutenant of Renfrewshire from 1794, again until his death. His contribution is recognised in a Memorial Plaque in Paisley Abbey.

The Macdowalls were prominent in Scottish society at this time ; William III’s brother, James was Lord Provost of Glasgow in the 1790’s and is assosciated with the foundation of the Royal Infirmary in the city. Another brother, David, was Governor General of Bombay.

By 1776, many of the Macdowall enterprises had been incorporated into the larger business of  Alexander Houston & Co. This was involved in shipping sugar,rum,cotton and tobacco across the Atlantic and returning with herring and goods required on the plantations in the Caribbean. This business collapsed in 1795 bringing a significant reduction in the wealth of the MacDowalls.

William III’s time as Laird of Castle Semple witnessed the transformation of Lochwinnoch from a largely agricultural/cottage industry village economy to one with a greater industrial base.
MacDowall was prominent in the management of this change.

The development of mills in the village necessitated an increase in population to provide the workforce for these. The new mill owners, as in Macdowall’s case, came from the wealthy landed class whose focus had hitherto been on farming. Changes to farming methods coincided with the growing industrialisation and farm-workers were encouraged to move from the farms into the village to work in the mills. Housing would be required for this new village population and MacDowall developed his plan for the New Town of Lochwinnoch from the existing centre in the Kirktoun around Auld Simon westwards to Calderhaugh.

From 1788-1795 MacDowall feu’d parts of Calderhaugh and during these years 53 new houses were built on what are now High Street and Main Street. Additional feus were granted in subsequent years. In 1791 a feu charter was granted by MacDowall to Messrs Fulton, Buchanan and Pollock for the land and water rights to build Calderhaugh Mill (the Silk Mill flats of today). MacDowall owned Lochwinnoch Old Mill and the Mill in Factory Street, now St Winnoc Road, in partnership with other wealthy villagers.

By the end of the century the Kirk at the foot of Johnshill, which had been partly rebuilt in 1729 by William I of Castle Semple, was again in disrepair. William III incorporated a new location for the replacement Parish Church into his New Town Plan and as patron of the church he   was responsible for it’s construction. The new parish church opened in 1808 in a position central to the “new”  village.

In 1792 William had given land to build the Burghers Kirk and manse, now the Calder United Free Church, and paid for the construction of part of the tower. He withdrew support, however, when told that the ministers would not be chosen by himself but by the congregation. The tower was not completed until 1815 when the new laird, John Harvey, donated £50 for the purpose.

On the death of William III in 1810 the wealth of the family had reached the point where his nephew, also William, had no choice but to put both family estates on the market. The Garthland Estate near Wigton was sold in 1811 and the Castle Semple Estate in 1814. 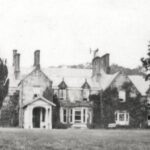 During the Lairdship of William III, the family had purchased the lands of Barr including Barr Castle in1778. In 1820, William 4th was able to buy Garpel House which stood on this land and, as the original Garthland Estate had been sold, this was renamed Garthland House. This remained in the family until 1935 when it was sold to the Mill Hill Foreign Missionary Society. It latterly became St Joseph’s Nursing Home.

Throughout the period 1727-1814 the MacDowall family had significant influence in Scotland and were the principal  landowners in the Parish of Lochwinnoch. From the time of the Reformation landowners were the Heritors of the Parishes with responsibility for providing a church with a bell and belfry, seats for at least two-thirds of the parishioners, a manse with a garden, a glebe of at least four acres, and a burial ground for the parish.In addition, they had responsibility for Poor Relief in the village and for contributing towards education by providing Parish Schools.

The current chief of the MacDowalls, Professor Fergus Day Hort MacDowall of Garthland, Baron of Garochloyne, Garthland and Castle Semple, Chief of the Name and  Arms of MacDowall, has been resident in Canada for many years. The family still own lands around the village ; the Barr castle and surrounding land,  the west side of the “Engine Tees “  ( more correctly the “Ingaunees”), fields on the Glenlora road and behind the recently demolished Garthland House, and Lochwinnoch Golf Club is on land rented from MacDowall.