The  history of Lochwinnoch is inextricably linked to that of the Castle Semple Estate and the three families who owned it for about 450 years. 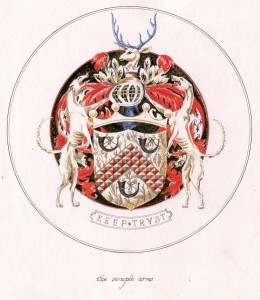 King David I gave his “High Steward“, Walter Fitzalan, huge tracts  of land including the “launs o’ Lochinauche“ some time before 1150. From this the House of Stewart evolved and became the Royal House of Scotland. Walter founded Paisley Abbey about 1165 and the “cappelam  at Lochinauche“ became a dependant chapel to the Abbey.

The Sempill ( Semple ) family supported the Stewarts and this ensured their advancement at  Court and their material progress. The name Sempill is first recorded in 1246 when Robert de Sempill witnessed the donation of the church at Largs to the monks of Paisley Abbey. Then, as Steward of the Barony of Renfrew, he witnessed Charters in 1280 and 1309, the latter under the seal of James, High Steward of Scotland. His two sons, Robert and Thomas, supported Robert the Bruce, the elder son being rewarded for his services with “ whole lands and pertinents  which belonged to John Balliol, lying in the tenement of Largs, to be held by him and his heirs in free barony “. The younger son, Thomas, fell at Bannockburn in 1314.

William de Sempill succeeded as Steward of Renfrew c 1340. Around this time the family acquired the lands of Eliotstoun ( now known as Elliston ) within the Parish of Lochwinnoch and this became the territorial designation of the chiefly line for the next 160 years. During these years the family increased their power and influence in Renfrewshire and beyond.

In 1367 Thomas de Sempill of Elliestoun is given the lands of Sanquhar by Charter.

In 1375 Sir John Sempill received a Charter from King Robert II comprising the grant which the Earl of Carrick, the King’s eldest son, had made to him of lands of Glasford in Lanarkshire. The daughter of Sir John Sempill, Jean, married Sir John Stewart, Sheriff of Bute, an ancestor of the Marquis of Bute.

In 1421, the next in the Sempill line, also Sir John, was one of the Commissioners appointed to negotiate the release of James I  from the English. In 1423, he was given safe passage to Durham by order of King James I “ to wait on his Majesty “. He later sat in the parliaments which met in the early 1440’s in Edinburgh and Stirling.

In 1451 further lands were secured by Charter to Sir Robert Sempill of Elliestoun. In 1463, his son Sir William became Hereditary Sheriff of the County of Renfrew and was conferred with a chapter of the Baronies of Elliestoun and Castletoun by King James III. A decade or so later Sir Thomas Sempill, Sheriff of Renfrew, moved the family seat to Castletoun. Sir Thomas died at the Battle of Sauchieburn in 1488 and was succeeded by his son Sir John Sempill who was created Lord Sempill in that same year.

The First Lord Sempill, had Castletoun rebuilt and renamed Castle Sempill. In 1505 he founded a Collegiate Church close to the castle and dedicated it to the “honour of God, and the blessed Virgin Mary, for the prosperity of his sovereign James IV and Margaret his Queen, for the soul of Margaret Colville of Ochiltree his former spouse and also for the salvation of his own soul and that of Margaret Crichton his present wife and all of his predecessors and successors and all the faithful deceased“.

The Collegiate Church was extended to accommodate the tomb recess of its founder within the apse. Today the church is under the care of Historic Scotland and considered a remarkable example of Gothic ecclesiastical architecture.

The eldest son, William, succeeded to the title and obtained a charter to the lordship with the assistance of the Regent Albany in 1515. The 2nd Lord Sempill was Lord Judiciary and heritable Baillie of the Regality of Paisley. More importantly he was a member of the Privy Council of James V in which role he favoured the marriage of the infant Mary, Queen of Scots,to the Edward, son of Henry VIII of England. William died in 1548 and was succeeded, as 3rd Lord Sempill, by his son Robert who was later to be known as the ”Great Lord Sempill“.

In 1547, the year prior to his father’s death, Robert had fought at the Battle of Pinkie and was taken prisoner by the English. He later became a supporter of the Queen Regent, Mary of Guise, widow of James V and was devoted to the interest of Mary Queen of Scots. Indeed, in 1560, Castle Sempill came under attack because of his opposition to the Reformation. However, after the murder of the Mary’s husband, Earl Darnley, Robert entered into a bond of association with other Scots peers to promote Mary’s son as King James VI. He fought against the Queen and Bothwell at the Battle of Carberry Hill and was a signatory to the warrant imprisoning Mary in Lochleven Castle. In 1568 he fought with Regent Moray at the Battle of Langside and in “consideration for this and many valuable services to king and government“ was given a charter to the lands of Paisley Abbey “upon the forfeiture of these from Lord Claud Hamilton”. The Hamiltons were later to regain these lands.

Of interest, within the wider context of Lochwinnoch’s history, it was through the Great Lord Sempill’s association with Regent Moray and the advancement  this patronage secured for the family, that later the first bridge across the River Calder was named  the Regent Moray Bridge, now more familiarly known as Bridgend.

During his tenure the Great Lord Sempill engaged in long-running feuds with the Houses of Eglinton and Glencairn – the Montgomery and Cunningham families respectively. These were dangerous times and in around 1570 Lord Robert built a small, easily defended stronghold, the Peel Castle, on an islet in the loch. This remained a place of relative safety for the family for some 150 years until it’s “dingin’ doon“ around 1735 as recorded in the Legend of Ringan Sempill. This Sempill was by reputation a “warlock“ and the ruins of the Peel Castle he frequented can still be viewed today.  Robert, the 3rd and Great Lord Sempill died in 1572.

Though he did not succeed to his father’s title, John, the 7th son of the Great Lord Sempill by his second wife, laid claim to his place in the family history. John married Mary, daughter of Alexander the 5th Lord Livingstone, who was one of the Maids of Honour to Mary Queen of Scots and immortalised in the folk-ballad :
“There was Mary Beaton, and Mary Seaton, Mary Carmichael and me “

This relationship allowed John to become a great favourite of the Queen and the Sempills prospered well under her patronage. However, this was the time of the Reformation. The Sempills had not renounced Roman Catholicism. John was castigated as “Sempill the Dancer“  by the Reformer, John Knox and in 1577 was accused of treason for conspiring to murder the Regent Morton. Denounced by one of his co-conspirators, he was sentenced to be hung, drawn, and quartered. The influence of family and well-connected friends enabled this sentence to be reduced to imprisonment and he was later released.

It was John’s elder, half- brother Robert who, in 1572, had succeeded the Great  Lord Semple. The  4th Lord Sempill assisted at the baptism of Prince Henry in 1594 and attended on the Queen at  the celebratory banquet for the event at Stirling Castle. James V1 appointed Robert as Privy Councillor and sent him as Ambassador to Spain in 1596. And shortly after that his scholarly uncle, Sir James Sempill of Beltrees was appointed Ambassador to France by James VI and I.

Robert , the 4th Lord Sempill, continued the family allegiance to the Roman Catholic faith and, in 1608, he was excommunicated  by the General Assembly of the Church of Scotland.  This meant that he could  no longer hold public office.

The 5th and 6th Lords, Hugh and Francis respectively, led somewhat less public lives. The latter died without issue and was succeeded as 7th Lord by his brother Robert . He supported the Royalist cause in the Civil War and was fined by Cromwell’s Common-Wealth under the Act of Grace and Pardon in 1654. By this time, their long royalist association had also resulted in the family estates being significantly diminished through enforced land forfeitures.

The 7th Lord was predeceased by his first two sons, both without issue, and was succeeded by his third son, Francis. This was a significant succession as Francis, the 8th Lord Sempill, was the first to become a Protestant and so became the first Sempill to take a seat in Parliament since the reign of Mary Queen of Scots. Embracement of the reformed religion came about as Francis, while a minor, had been placed under the care of the protestant Earl of Dundonald. Francis, 8th Lord Sempill, died without issue in 1684 and was succeeded by his elder sister, Anne, as Baroness Sempill. This succession was possible by a Deed of Entail confirmed by the Crown in 1685. Three years later Baroness Sempill secured a new charter to the title which granted succession to her daughters  should there be no male issue. Anne married Francis Abercrombie of Fettermier in Aberdeenshire and was succeeded to the title by three of her sons ! It would not be until 1835 that the title would next pass to the female line.

Anne’s eldest son, Francis the 10th Lord Sempill, sat in Parliament from 1703 and was strongly opposed to the Union with England. In the Craigievar Manuscripts , the 16th Baroness Sempill was later to note that “not withstanding very considerable offers if he would comply with the measures of the Court in relation to the Union, he ( Francis ) gave that treaty all opposition in his power and  voted against every article”. Francis was unmarried, died in 1716, and was buried in the Chapel Royal at Holyrood. The title passed to his brother, John.

The 11th Lord Sempill supported the Hanoverians during the 1715 Jacobite Rebellion and trained an Ayrshire regiment for the fight against Prince Charlie. He died in 1727, also without issue, was buried at Holyrood and succeeded by his brother, Hugh as the 12th Lord Sempill.

Hugh was a professional soldier whose military career had seen action in Flanders, Spain, and France. He was later to become Colonel of the 25th Regiment of Foot at the outset of the 1745 Jacobite rising and was Brigadier-General in command of the left-wing of the Royalist army at Culloden in 1746. He died that year and was interred at the West Church in Drumsaisle, Aberdeenshire.

However, Hugh 12th Lord Sempill had brought his family’s association with Lochwinnoch to a close many years earlier. In 1727, the year he had succeeded to the title, Hugh sold the estate at Castle Sempill. By then the Sempills had become less wealthy and influential; their years as powerful Barons in the county of Renfrew ended.

The family had little or no connection with Lochwinnoch thereafter. Until, in the 1990’s the present Lord Semple, a marketing professional, set up a Semple Family Association, now referred to as Clan Semple, and formed some link to the place through the Clyde Muirshiel  Regional Park Authority.