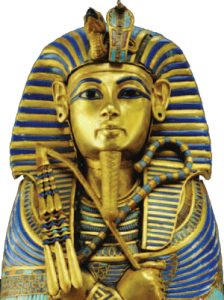 One of the most interesting people I ever met while working as a countryside ranger at Clyde Muirshiel Regional Park was the erudite Margaret Orr.
Mrs Orr, who was in her 80s, lived at Newtown of Belltrees overlooking Lochwinnoch. She was the daughter of famous archaeologist Arthur Mace (1874-1928).   Mr Mace accompanied Lord Caernarvon and Howard Carter to Egypt to locate the tomb of boy king Tutankhamun in 1922.

I became acquainted with her around the time an exhibition was being staged about Egyptology in the popular Lochwinnoch Community Museum under the curatorship of distinguished author and historian Dr Christopher Lee.
The full story of the expedition is told in a delightful booklet entitled "The Grand Piano Came by Camel" which can be borrowed from Renfrewshire Council Libraries.

Illustrated with historic documents and evocative photographs of deserts, pyramids, oriental ornaments and funerary relics, the publication describes how Margaret, who was just a child, and her family joined Mr Mace and other members of the archaeological team in Egypt as the project neared its successful conclusion.

The eerie story of how Tutankhamun's curse subsequently decimated many members of the excavation team is well known.

Within days of the sepulchre being opened and its treasures removed, Lord Carnarvon died of blood poisoning after fatally infecting a mosquito bite while shaving with a razor blade.

Mr Mace, Margaret's father died in his early 50s following his incursion into the burial chamber.  And her young pal, Miss Frances Winlock, perished in her early 20s from the deadly disease, tuberculosis.  Frances and Margaret both played at being archaeologists inside Tutankhamun's tomb.

Yet, in our conversations, Mrs Orr, always made light of the curse theory.
She claimed it was concocted by journalists to sensationalise the story of the excavation.  And she said her father was ill before he took part in the expedition.
Be that as it may, other strange events involving death and misfortune followed which were never satisfactorily explained.

For example, Howard Carter, the lead archaeologist on the team, survived for a few years after the grave was opened. But he died a broken man and was never able to capitalise financially on the amazing sights he had seen inside Tutankhamun's last resting place or the glittering treasure hoards which he uncovered.

Maybe the enormity of breaking into the sanctuary weighed heavily on the archaeologists' minds and the grim prophecy — "Death shall come on eagles' wings to them who disturb the Pharoah's tomb" preyed on their minds to such an extent that its sentiments came true.  Or maybe the sepulchre was sealed in such a way by Egyptian priests well-versed in plant and herbal lore that deadly poisons were released when the walls and doors were breached, infecting intruders with fatal diseases when they breathed in the germs

The story of Lochwinnoch's links with Tutankhamun reminded me that the majestic countryside around the village IS also a holy land studded with the ancient burial mounds of long-dead men, women and children who lived in local glens, valleys and woods thousands of years ago.

I counted it a privilege that my work took me to many of these sacred sites where the people of the past were laid to rest in ceremonies conducted with great solemnity and dignity by tribal priests.  I was always aware of the sanctity of such places and approached them in a spirit of reverence, awe and understanding.

Whatever the season of the year, there was always the awareness that the men, women and children buried there and those who mourned their passing were ordinary people just like ourselves.

Burials which took place during the Neolithic period (4000-2500BC) were usually in elongated mounds of earth known locally as long barrows.  The still-visible one at Cuff Hill on the boundary between Lochwinnoch and Beith parishes is one of the finest in Scotland.  A smaller structure which could also be a long barrow may exist at Knockbartnock Farm at the top of Johnshill on the Kilmacolm road.

During the Bronze Age (2500-600BC), cremations in cinerary urns frequently took place with one of the most notable being at Knockmade Hill, near Clyde Muirshiel Regional Park headquarters at Barnbrock Farm.

Iron Age funerals (600BC-100AD) were characterised by a bizarre process known as excarnation. This involved the bodies of the deceased being hung in trees and torn to bits by crow, magpies and other predatory birds.  Excarnation, which may have taken place in the vicinity of one of the many Iron Age hill
forts in Clyde Muirshiel Regional Park like Smeath Hill and Dunconnel Hill, resulted in the scattered remains of the dead being returned to the bosom of the Mother Earth Goddess to be born anew during their next incarnation.

It was part of the great story of birth, life, death and rebirth linking the ancient peoples of Egypt and Lochwinnoch.